Scenic Train Trips in the U.S. 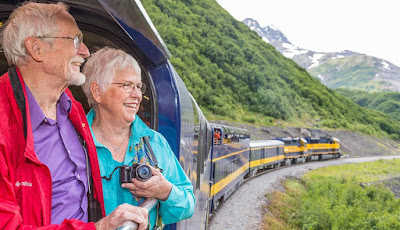 Think a cruise is the best way to see Alaskan scenery? Hop aboard the Coastal Classic. From mid-May to mid-September, the train runs 114 miles from Anchorage to Seward, chugging alongside the Chugach Mountains and the Turnagain Arm waterway (in 1778, explorer James Cook had to “turn again” when he couldn't find the Northwest Passage), which feeds into the Gulf of Alaska. Keep an eye out for whales and bald eagles. After a stop in the town of Girdwood, the train heads to the wild Kenai Peninsula backcountry, providing views of glaciers and waterfalls. In Seward, a seven-hour layover allows guests to pursue such options as a cruise through Kenai Fjords National Park or a visit to Exit Glacier. 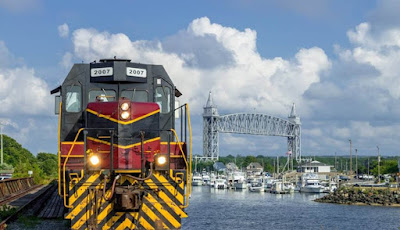 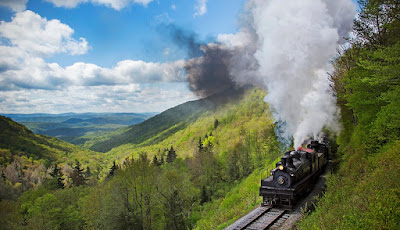 Cass Scenic Railroad
The railroad's Bald Knob Trip takes riders up Cheat Mountain to Bald Knob, West Virginia's third highest peak at 4,842 feet. From this often-misty mountain perch you'll see rolling forests (which, no surprise, are gorgeous in autumn) and the National Radio Astronomy Observatory. The 11-mile railroad line was constructed to haul lumber to Cass, a company town built by the West Virginia Pulp and Paper Company in 1901 (the company store is still in business — enjoy some hand-scooped ice cream from the soda fountain). Many of the passenger cars are refurbished logging cars, and they're pulled by steam locomotives, just like in Cass's lumber heyday. 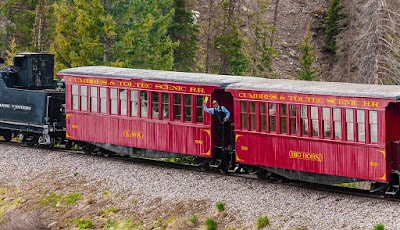 Cumbres & Toltec Scenic Railroad
This 64-mile trip has it all: rugged mountains, wood-beam tunnels, river crossings, rustic towns, aspen trees, and occasional bear sightings. The railroad runs between Antonito, Colo., and Chama, N.M. (you can board in either town), climbing over the San Juan Mountains to the Conejos Valley. After departing from Chama, the locomotive scales the 10,015-foot-high Cumbres Pass. The summit view includes alpine meadows with wildflowers and dark green conifers, and later you'll descend 800 steep feet into the Toltec Gorge. The train has been featured in more than 20 films, including Butch Cassidy and the Sundance Kid and Indiana Jones and the Last Crusade. To feel the sun and smell the locomotive smoke, ride in the open-air Gondola Car. 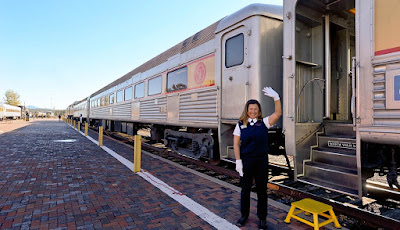 Grand Canyon Railway
Instead of sitting in traffic jams to enter the hugely popular national park, take the train to the South Rim, as tourists have done since 1901. The 65-mile trip starts in Williams, Ariz., and heads through Ponderosa pine forests and desert prairies. You'll also pass the San Francisco Peaks, the highest point in Arizona (elevation: 12,600 feet). The six rail cars range from 1920s-era Pullmans to the two-floor Luxury Dome, which includes a private bar and a dome for viewing. Watch for animals such as California condors and pronghorns (which look like antelopes). Train trivia: The railway's steam engines, which run once a month on Saturdays, are fueled by recycled French fry oil from local restaurants.
Cost: Rates range from $67 to $226; AARP members can save 15 percent on packages that include meals and accommodations
Reservations: 800-843-8724 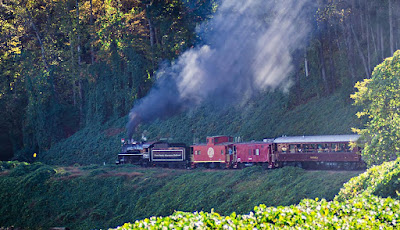 Great Smoky Mountains Railroad
This North Carolina railroad offers two must-ride roundtrip options. The 44-mile, 4.5-hour Nantahala Gorge Excursion takes you along the Tennessee and Nantahala rivers, and across Fontana Lake (created in the 1940s after the construction of the 480-foot-tall Fontana Dam), before heading into the gorge ("Nantahala” is a Cherokee word meaning “Land of the noon-day” sun — deep parts of the gorge only receive direct sunlight at midday). The 32-mile, four-hour Tuckasegee River Excursion features quaint bridges and valley greenery. Remember the famous train wreck scene in the movie The Fugitive? It was filmed on this line, and you'll pass train wreckage from the film. (Don't worry, your train will stay on the tracks.) 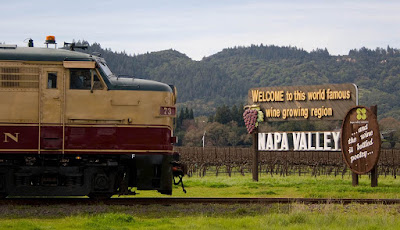 Napa Valley Wine Train
Gourmet food, vintage cars, California wines — it's no surprise that this 36-mile roundtrip experience has been a Napa favorite since 1989. Guests can book three-hour lunch or dinner trips — entrees might include pan-seared Pacific halibut and roasted tenderloin — as well as half- or full-day journeys with stops at local wineries. But you might not want to leave the plush Pullman cars, which feature etched glass partitions and comfy armchairs. The glass-enclosed Vista Dome Car provides elevated views of the Napa Valley landscape (though note that it may get dark for viewing during the dinner trip). Special events include Murder Mystery trains and a Hop Train featuring brews from the Napa Palisades Beer Company.

Email ThisBlogThis!Share to TwitterShare to FacebookShare to Pinterest
Labels: Train