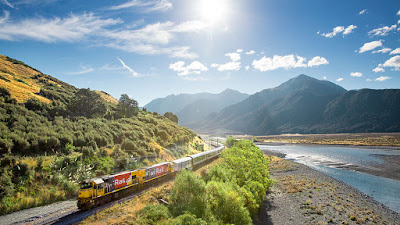 The TranzAlpine is a passenger train operated by The Great Journeys of New Zealand in the South Island of New Zealand over the Midland Line; often regarded to be one of the world's great train journeys for the scenery through which it passes (see famous trains). The journey is 223 kilometres (139 mi) one-way, taking almost five hours. There are 16 tunnels and four viaducts, with the Staircase Viaduct being 75 metres (246 ft) high.

The train has become increasingly popular, and carried 204,000 passengers in the financial year ending 2007. By 2016, passenger numbers were approximately 130,000 a year, but rising again after the setback of the Christchurch earthquake, and were exceeding pre-earthquake levels.